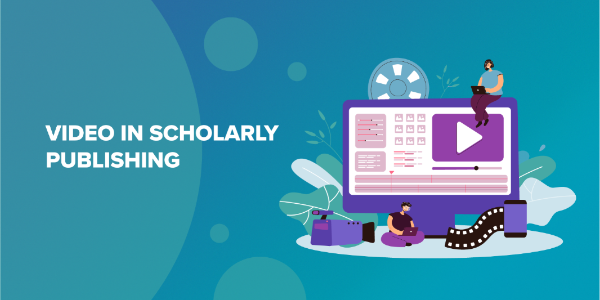 A recent webinar from Highwire mapped out the current status of streaming media in scholarship, provided insight into the recommendations from the NISO Video and Audio Working Group, and outlined some current case studies and challenges.

As Tony Alves, senior VP of product management at Highwire, noted, video content has been available in various formats for some time now, but initially it was mostly just people talking and audiences wanted actual demonstrations and procedures. Yet even when this type of content was generated, the lack of discoverability made for initially low usage when brought online.

Video as a Form of Scholarly Communication

Things have changed quite a bit since then, and Dylan Ruediger, senior analyst at Ithaka S+R, is doing research to answer some questions about the potential impact of the exponential growth in streaming and recorded content. For example, what are the implications of transforming ephemeral events into permanent and widely available content? What is the intellectual value of presentations within scholarly communication and publishing? And what is the commercial value of the resulting recordings? He noted that societies are responding to these questions in a variety of ways and with varying business models, including:

Still unclear is the value proposition of conference presentations delivered as part of the process of new ideas iterated over time.  What sort of value will the presentation retain, the longer away it gets from the live event? Are we at risk of content overload? And of course, discoverability remains at the core of making sure the content is valued.

Ruediger noted that societies tend to take a fairly traditional approach to new products and thus most of the innovations in streaming media seem to be happening in the world of startups, including Cadmore Media and Underline.

Bill Kasdorf, principal at Kasdorf & Associates, and co-chair of the NISO Video and Audio Metadata Guidelines Working Group, provided some context to the recently issued recommended practice.  The project was initially undertaken because there are so many different metadata schemes for media content and often two parties that need to “talk” to one another use different ones – in effect, speaking different languages. Kasdorf clarified that the recommendations are just suggested practices, not standards. There are already many standards relevant to media, used in different ways, often proprietary, and deeply embedded in content and systems that are unlikely to change. The group studied 40 use cases and eight commonly used metadata models: MARC, MODS, PBCore, EBUCore, IPTC VMD, Dublin Core, Common Metadata, and Schema.org. The resulting practice provides a vocabulary, not a taxonomy, in plain English, with three levels of hierarchy grouped into five categories. The goal is to enable sender and receiver to communicate the right information about content. Check out the recommended practice for yourself on the NISO site.

Marjorie Hlava, president of Access Innovations, has been working with multimedia content long before it was streamed online. She noted that no matter what the format, the same questions of how to find the information you’re looking for apply and are further complicated when you don’t know what you want, what it might be called, where to look, or how it looks. Video is notorious for no or poor metadata, except maybe a title and the running length. Providing semantic metadata gives better access to content, and it all starts with a text layer, usually a transcription of the content.  Then the data can be tagged with subject information (preferably from a controlled vocabulary). Ideally, the full text will be timestamped, which helps the user find the exact part they are looking for in the video.

Hlava noted it’s crucial to ensure the search functionality is using the tagged metadata as a priority term and not just dumped into the full text. If the metadata is only put into the full text, it results in about a 5-7% increase in search accuracy, which is hardly worth doing. But if it’s used as priority terms, you can see about a 40% increase in accuracy, which is significant.

Publishers’ Attitudes to Video Now and in the Future

Oliver Rickard, product director at Highwire, recently conducted a survey of Highwire clients to better understand why publishers incorporate video into their content, how they are doing this, what challenges they face, and their hopes for video in the future. For one medical client, the key is the ability to embed video far and wide, from Twitter and Facebook and the journal website to newsletters and press releases. They choose video to expand the reach of research and give a face to the science, as well as to include authors in the telling of their stories.

Another client that publishes medical textbooks uses video to improve instruction and help with learning and has found that if a text is accompanied by multimedia, it is far more likely to be adopted by instructors, who can place the videos directly into the LMS (learning management system). A challenge in this use case is between monetization and usability, where text content is typically behind a paywall and requires authentication. Rickard’s third client example is also a medical publisher that uses video to help students solve problems, shine light on textbook explanations, and bring scientific concepts to life through animations and demonstrations. Challenges here include finding the right people to create the videos and managing costs, as subject matter expertise and editing can add up; as well as keeping the videos short and to the point to encourage student engagement. This client notes that university students think video first when they are learning, so doing video is not really the question, but rather how to continuously improve the user experience.

This is a recap of a webinar; you can view the recording here.

This site uses cookies. By continuing to browse the site, you are agreeing to our use of cookies.

We may request cookies to be set on your device. We use cookies to let us know when you visit our websites, how you interact with us, to enrich your user experience, and to customize your relationship with our website.

Click on the different category headings to find out more. You can also change some of your preferences. Note that blocking some types of cookies may impact your experience on our websites and the services we are able to offer.

These cookies are strictly necessary to provide you with services available through our website and to use some of its features.

Because these cookies are strictly necessary to deliver the website, refuseing them will have impact how our site functions. You always can block or delete cookies by changing your browser settings and force blocking all cookies on this website. But this will always prompt you to accept/refuse cookies when revisiting our site.

We fully respect if you want to refuse cookies but to avoid asking you again and again kindly allow us to store a cookie for that. You are free to opt out any time or opt in for other cookies to get a better experience. If you refuse cookies we will remove all set cookies in our domain.

We provide you with a list of stored cookies on your computer in our domain so you can check what we stored. Due to security reasons we are not able to show or modify cookies from other domains. You can check these in your browser security settings.

These cookies collect information that is used either in aggregate form to help us understand how our website is being used or how effective our marketing campaigns are, or to help us customize our website and application for you in order to enhance your experience.

If you do not want that we track your visit to our site you can disable tracking in your browser here:

We also use different external services like Google Webfonts, Google Maps, and external Video providers. Since these providers may collect personal data like your IP address we allow you to block them here. Please be aware that this might heavily reduce the functionality and appearance of our site. Changes will take effect once you reload the page.

The following cookies are also needed - You can choose if you want to allow them: